Those who wish to wirelessly connect their Raspberry Pi to a network are faced with choosing the right Wi-Fi adapter. Depending on the adapter, set-up is either very easy or associated with considerable effort and potential complications. The reasons for this are the various chipsets that come with different Wi-Fi adapters. Problems particularly arise with completely new chipsets for which the Linux kernel does not yet provide a driver or for which a Linux driver does not even exist yet.

After having used many different Wi-Fi adapters on my Raspberry Pi at both greater and lesser expense, two personal favourites have emerged for me. The two Edimax Wi-Fi adapters are by far the easiest to set up:

Due to low power consumption, the Edimax adapters can be used directly on the Raspberry Pi without an additional active USB hub. Both Wi-Fi adapters are recognized and integrated automatically because the kernel already has the appropriate driver (RTL8192CU) installed. After that, all that remains is the configuration of the wireless network.

Raspbian recognizes he adapter as soon as it is inserted. You can check this easily by using the following command:

Subsequently, we can see that a Realtek Wi-Fi adapter was recognized and that the corresponding driver has loaded:

After the stick was recognized, a new network device should appear which can simply be verified by using ifconfig: 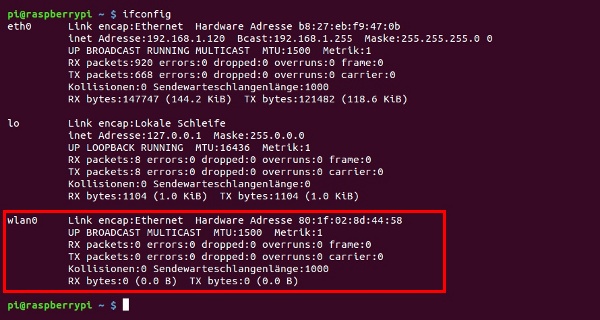 Before establishing a wireless network connection, the Edimax driver’s power saving function should be deactivated, otherwise the connection will be interrupted during inactivity. To avoid this, a configuration file for the driver must be created:

In order to establish a connection with our wireless network, we must now edit the file /etc/network/interfaces:

Finally, save the changes and restart the network service.

If the Wi-Fi interface is to be assigned to a static IP address within the network, the file contents should look as follows:

This article was helpful for you?
Please support datenreise.de/en – Thank you!